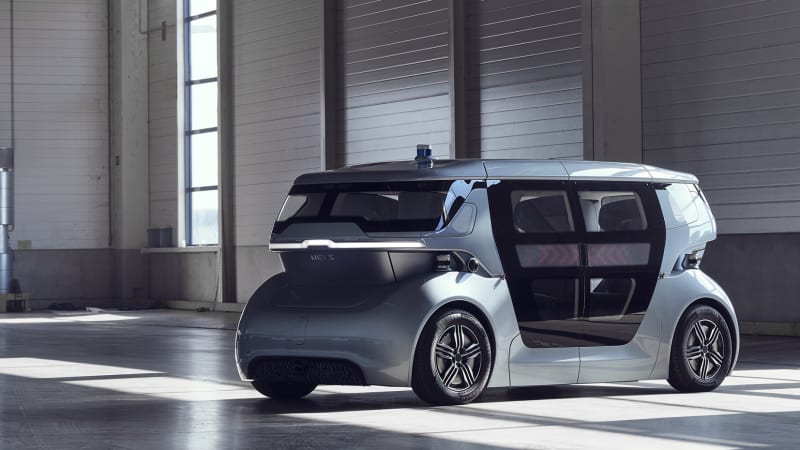 National Electric Vehicles Sweden (NEVS), the company that purchased Saab’s bankrupt carcass in 2012, has introduced an autonomous ride-sharing shuttle named Sango and announced plans to test it in real-world conditions. It also outlined a system named PONS that will allow operators and riders to connect with the shuttle.

Saab famously claimed its cars were born from jets, but the Sango looks more like something you’d find in a store that sells small kitchen appliances than on an aircraft carrier sailing across the Atlantic. It wasn’t designed to go fast, or to deliver engaging handling. Stylists intentionally gave it a boxy silhouette to maximize interior space and let operators offer three cabin configurations called private, social, and family, respectively. Its six seats can be moved around and rotated as needed, and the passengers can raise privacy walls if they don’t feel like socializing with fellow riders. The shuttle’s seating capacity drops to four with the walls raised.

Chinese technology firm AutoX provided the Sango’s self-driving hardware and software, though NEVS pointed out its shuttle is modular enough to use any autonomous system on the market. This is a wise strategy that widens its target audience. Operators will in theory be able to choose whether they want to purchase a turn-key self-driving shuttle or buy the basic structure and stuff their own technology into it. NEVS grouped the app customers will use to request a ride and a fleet management system into a software package it named PONS.

Technical specifications haven’t been released. All we know is that it’s electric.

NEVS confidently stated autonomous shuttles are closer to the mainstream than many think.

“Getting from A to B with self-driving electric vehicles is not as far off as perhaps the car industry is implying. The era of one person per car and the era of owning a car are soon things of the past,” opined Anna Haupt, the company’s vice president of mobility solutions, in a statement.

Engineers have started testing the first running Sango prototype at NEVS’ headquarters in Trollhättan, Sweden. Looking ahead, the company plans to deploy a fleet of 10 autonomous shuttles in Stockholm, where they will be used by members of the general public. Autoblog learned from a company representative that testing will probably start in 2022, and that the firm is taking COVID-19-related concerns into account.

The aforementioned privacy walls can also serve as virus barriers, and each shuttle will be equipped with individual climate control and ventilation systems with air filters. “We will as well look into other possible actions in order to decrease the spread of COVID-19 or other viruses if needed,” the spokesperson added.

Several light-years separate the Sango and Saab-badged cars like the 99, the 900, and the 9-3, but the idea of making an electric van isn’t new in Trollhättan. In the 1970s, the company’s defense and plane-making division developed a short-range, battery-powered mail delivery vehicle and built two prototypes from scratch using a handful of bits and pieces mined from the 99 parts bin. Saab tested the van extensively, one of the prototypes covered about 7,000 miles, but it ultimately consigned the project to the automotive attic.