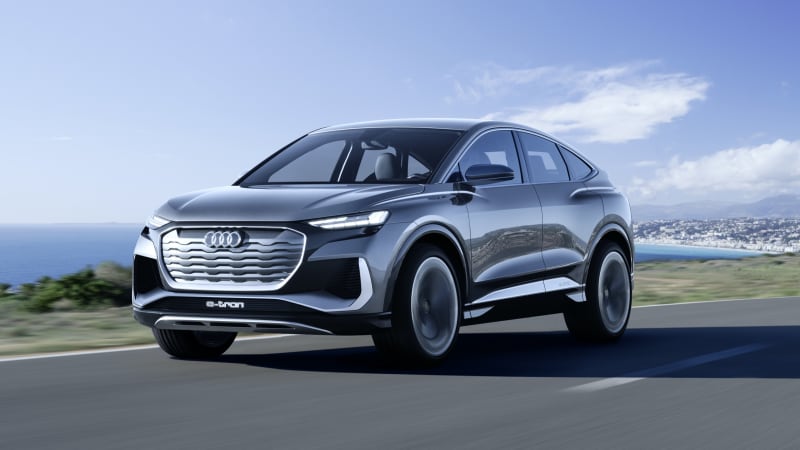 Audi keeps plugging along with its E-Tron family of electric cars. We’ve seen a few already. There’s the simply named E-Tron crossover that’s already on sale here in the United States, and now there are the S and S Sportback variants. Beyond that, there are a number of other models that signal production intent: E-Tron GT (with underpinnings shared with the Porsche Taycan, E-Tron Sportback (arriving soon) and Q4 E-Tron. Now, Audi has introduced another concept previewing a production vehicle with the Q4 E-Tron Sportback.

From the front, and underneath the sheet metal, it is essentially the same car as the Q4 E-Tron on which it is based. When you move to the side, you notice the big difference where the roofline takes an athletic dive toward the rear, giving it that crossover-coupe profile we’ve all come to love (we’re allowed to love them now, right?). In the rear, we see a spoiler placed perhaps a little higher than one would expect. Audi said that placement was dictated by wind tunnel testing, and the rear glass continues below it. Overall, the Sportback is more slippery than the non-Sportback Q4 E-Tron, with a drag coefficient of 0.26. Other exterior elements worth noting are the huge 22-inch wheels, the prominent rear diffuser, the horizontal rear light bar and the curves above the fenders, which designer Amar Vaya praised as being less “stiff” than other Audi vehicles.

Audi says its shape doesn’t sacrifice much in terms of space. Its packaging, with the battery pack below the floor and between the axles and no driveline tunneling through the interior, helps to better optimize the interior volume compared to an internal combustion vehicle of the same exterior size.

As for tech, the Q4 Sportback E-Tron gets an augmented reality head-up display that we haven’t had a chance to check out yet. We’re told it will overlay directional arrows over the road in front of you. Up front, it gets trick daytime running lights that have some form of customization to them (Audi is in talks with regulators about bringing this to the United States). This concept we see here focuses on the exterior styling and powertrain, so we hope to better understand these technological ambiguities as we get closer to production.

That aforementioned battery pack has a capacity of 82 kilowatt-hours, which is big enough for more than 279 miles of driving range on Europe’s WLTP cycle. It supplies energy to two electric motors — one at each axle — giving it all-wheel drive and a total of 301 horsepower and 228 pound-feet of torque. The bigger of the two motors is in the rear, giving the Q4 Sportback E-Tron rear-drive bias, and the front motor can shut down altogether for better efficiency. There will also be a rear-drive-only version with a smaller battery, but it boosts range to more than 310 miles. Both versions will do 0-62 miles per hour in 6.3 seconds, with a top speed limited to 112 mph. It’s not yet clear which market will get which versions, but we wouldn’t be surprised if the U.S. only receives the AWD model.

As for the production version of the Q4 Sportback E-Tron, this concept is basically it. The one you can buy will have things absent here, like door handles, but Audi says it will look very similar. Judging from the evolution of other E-Tron models, we think there’s good reason to believe that what you see here is pretty much what you’ll get.

It’s expected to go on sale in spring of 2021, hitting most markets in the summer. Audi is targeting a starting price under 40,000 euros, or about $44,882 at current conversion rates.