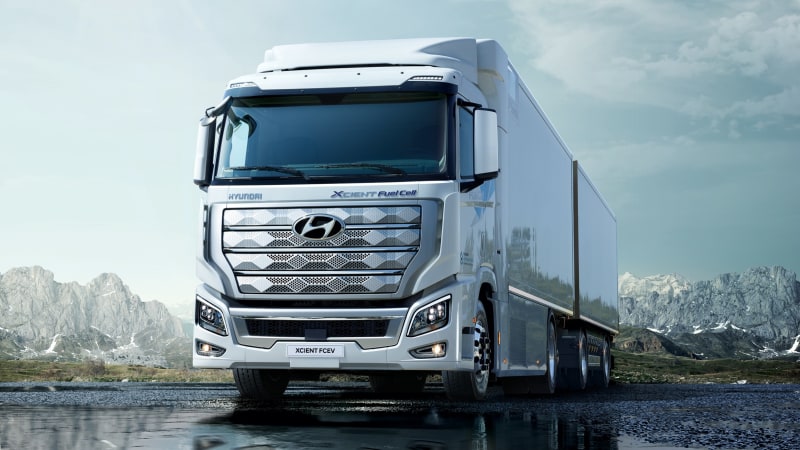 Hyundai has a relatively long history with, and apparent resolute dedication to, hydrogen. That dedication goes beyond passenger vehicles like the Tucson Fuel Cell or Nexo. Today, its latest and greatest hydrogen effort is in the realm of commercial vehicles. Hyundai has announced that it is sending the first 10 of its new Xcient Fuel Cell semi trucks to Switzerland, where they will go to work moving goods while creating no harmful emissions.

This is only the first shipment, as Hyundai plans to ship a total of 50 of these Xcient FCEV semis to Switzerland by the end of this year, with deliveries to customers beginning in September. This will be followed by many more, totaling 1,600 hydrogen-powered Xcient trucks going to customers by 2025.

The Hyundai Xcient Fuel Cell is powered by a 190-kilowatt hydrogen fuel cell system, made up of two 95-kW fuel cell stacks. Hydrogen is stored in seven tanks, with about 71 pounds of hydrogen providing a driving range of almost 250 miles between fill-ups in the 4×2 version (but Hyundai says more accurate range figures based on configurations and loads will be updated later). It also employs a 73.2-kilowatt-hour battery and a 350-kW (469-horsepower) electric motor. It has a top speed of about 53 miles per hour.

Hyundai also says it is developing a longer-distance version good for 621 miles of driving, which is intended for global markets, including North America.

Though Hyundai hails this as the “world’s first mass-produced fuel cell heavy-duty truck,” other hydrogen semis have been put to use or will be made available soon. Toyota has been testing fuel cell trucks as part of its “Project Portal,” with early prototypes put to work at the Port of Los Angeles, on Southern California routes and even drag-racing a diesel-powered counterpart. Nikola has been working on its trio of fuel cell trucks for years. Honda and Isuzu also announced a partnership for hydrogen-powered heavy-duty trucks earlier this year.

As for the Xcient Fuel Cell, we like the look of this big rig, with the way light glints off its enormous grille. That said, we’re excited about the future, too, as Hyundai also recently showed off a retro-futuristic look with its HDC-6 Neptune hydrogen truck. Give us weird-looking semis that don’t pollute, and we’ll be even happier.

The 2021 4 Series is a ground-up redesign of BMW’s long-running, two-door compact. While the days of it simply being referred to as a 3 Series coupe may be well behind it, the fundamentals of the formula have not changed. Everything from the chassis up is clean-sheet, and in executing this overhaul, BMW appears to have addressed the biggest shortcomings of the previous generation.

There's only one thing holding us back from calling the 4 Series an across-the-board upgrade. Yeah, we’re referring to BMW’s aesthetic decisions. Beauty is in the eye of the beholder, but we’re having a hard time wrapping our heads around that front end and we're definitely not alone. Maybe it would be easier if the nostrils weren’t the size of dinner tables. “Apart from that, Mrs. Lincoln …” the 2021 4 Series impresses.

Much like the 3 Series sedan, the 4 has grown quite a bit, gaining two inches of wheelbase and roughly five inches in overall length. BMW quite expertly kept the wei…

DETROIT — Volkswagen is recalling more than 218,000 Jetta sedans in the U.S. to fix a fuel leak problem that can cause fires. The recall covers certain cars from the 2016 through 2018 model years.

Volkswagen says in documents posted Wednesday by U.S. safety regulators that bolts holding some high-pressure tubing can come loose over time, allowing fuel to leak and increasing the risk of a fire.

The German automaker hasn’t figured out yet what it will do to fix the problem, but it expects to start notifying owners around Dec. 20. Affected vehicles have 1.4-liter engines built from June 18, 2015 to Dec. 9, 2017.

Documents posted by the U.S. National Highway Traffic Safety Administration don't say if there have been any fires, but they mention an unspecified number of claims. The documents say owners could smell a fuel odor or see fuel leaking from the engine compartment.

Volkswagen says it’s not aware of any fires or injuries. The company said custom…