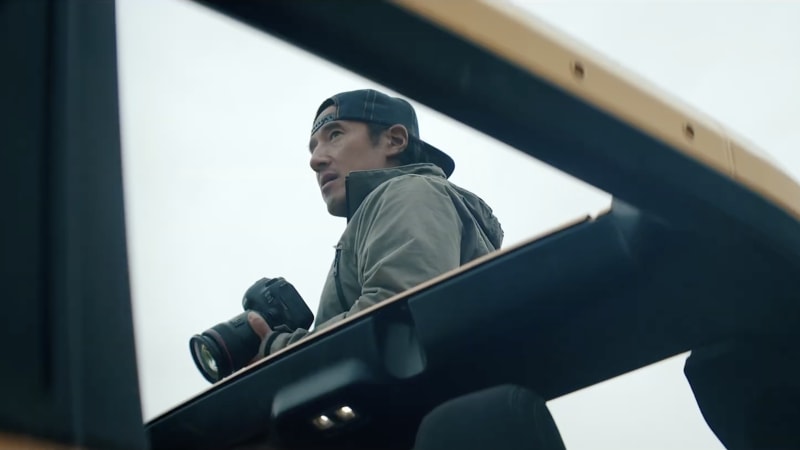 There’s not a lot that Jimmy Chin hasn’t done. While he’s most famous for co-directing the Academy Award-winning documentary “Free Solo,” his personal achievements are impressive in their own right: He’s skied off the summit of Mount Everest, was part of the first team to climb Meru, has been on climbing expeditions to Antarctica, and has crossed the Chang Tang plateau on foot, just to name a few. Most recently he collaborated with Disney CreativeWorks and Ford to co-create the three network reveal stories about the all-new Ford Bronco. We sat down with him to discuss that project and what the Ford Bronco means to him.

Christopher McGraw: How did you get involved with the Ford Bronco on this project?

Jimmy Chin: Well, Ford came to me to talk about putting together a few films on the relaunch of the Bronco. And, you know, obviously, I knew it was a huge opportunity. I’m very excited about it. But with any sort of project that gets, you know, this kind of attention, there’s also a lot of pressure. So fortunately, that’s a space that I spend a lot of time in.

Like, it’s the classic feeling on an expedition where you’re really motivated to climb something, whether that’s in the Himalayas or around the world. But there’s also that nervous energy of like, OK, we’ve really got to step up and make this great. But Ford’s been an incredible partner to work with. And we had some really talented people. And we just dove into it and wanted to do something that was special.

CM: Normally, your subjects are human beings, which I think still rings true with the three videos that you produce here. But I was just curious if there are any unique challenges that shooting a car brought to the production that perhaps you hadn’t encountered before.

JC: Well, I think that what we are really trying to achieve here is just to, A, tell a great story. You know, we had obviously great talent, Kip Moore, a really successful and amazing country musician. Brooke Raboutou, who is representing the U.S. in the Olympics as a climber, and then myself.

But the idea behind these films was really related to what the Bronco was representing in this moment — a vehicle that could, like, really get you back outdoors to reconnect with the wild places. And all three of us — the characters in each of these films — have a really special relationship with outdoors.

And then for me also, obviously, I spend a lot of time in the mountains and in the outdoors. It’s a really important muse for a lot of my work. So it’s really kind of combining these stories and telling each person’s story but also tying in how the Bronco in a lot of ways is able to get us to the places that we love.

Obviously once watching the videos, they could take your name out of the titles and people familiar with your work would know that this is a Jimmy Chin collaboration, in my opinion.

CM: How do you balance keeping your personal branding consistent, as well as staying on message for brands and companies that your work is highlighting? Do you just only accept work from brands that you care about and speak to you?

JC: Sure. I mean, I am very discerning about the people I work with and the brands I work with. The Bronco for me was a natural fit. It’s such an iconic vehicle. And it’s such — it’s got such great heritage. For me, that is exactly the type of partner I want. It just really makes it a lot easier for me to do the work because it’s real, and it’s authentic. I don’t have to try too hard.

It just made sense to me. But when I think about the kind of work I aspire to do, it’s really about kind of telling human stories that have a universal thread. And I think that with Kip and Brooke and myself, a lot of people see the success of the careers, but they might not necessarily appreciate how hard it was to get there — the sacrifices you have to make — the grit, the hard work that goes into it.

And that process of getting to where we have all gotten to is so important. But also, oftentimes when you get to the place you’re going to, it’s because you’ve loved the process of getting there. You’ve had to embrace the hard work and the challenges to get there.

And that to me was a really good metaphor for the Bronco, because this is the vehicle that can handle all the challenges on a very potentially hard road to getting to where you want to get to. And that was how I was thinking about it, crafting those two stories so that we didn’t have to be overtly constantly being like, this is the vehicle that will get you there. I wanted people to feel it.

CM: Now, you’re probably best known for directing “Free Solo,” but your personal achievements are incredibly impressive as well. You’re part of the first team to summit Meru, you skied off the summit of Mount Everest, crossed the Chang Tang Plateau on foot carrying everything behind you.

JC: You did your homework.

JC: He’s a great mentor of mine. He’s the one who actually taught me to film. And if you watch any of my films in the acknowledgements and thank you’s in the back, he’s always very high on that list of thank you’s.

CM: Chang Tang Plateau, that was one of your first video trips, right?

JC: Yes, that’s actually the trip that kind of started me off as a filmmaker. And Rick … he was the one who said, you know, look, I know you haven’t filmed before, just commit and figure it out.

And he basically mentored me for a few months while I was making that film and then came back after the trip and worked with me on crafting the story. That’s how I got started. And it was a big breakthrough expedition for me because that’s how I got my foot in the door at National Geographic. That was the first time I published images in National Geographic magazine, which is as a photographer, as you know, is a dream.

CM: Yeah, definitely. Along those lines, most of your outdoors achievements are probably considered human-powered. What kind of role have cars played in your life growing up and even now?

JC: I think I mentioned in the film, when I finished college I moved into my car and lived on the road for over seven years. And the open road for me really represented freedom. And especially for me and the American West, some of my fondest memories, that create that sense of nostalgia are just driving down the big open roads of the West, sometimes not exactly knowing where I’m going but just out for an adventure.

And I think the Bronco really embodies that spirit for me because it’s about going on an adventure, going to less explored parts of the country. It gives you that access. … to the places that I love going to climb or to ski.

And I actually really appreciate that time in the car. Sometimes it’s with your friends having great conversations. Sometimes it’s just listening to music, driving down the road by yourself just being reflective on life. And so I guess you could say it’s been a big part of my life.

CM: Your next major project is a documentary about Doug and Kris Tompkins and the work they’ve done along with Yvonne Chouinard down in Patagonia. Doug, who founded North Face, he and Yvonne and three other guys drove a Ford Econoline in 1968 from California down to Patagonia surfing and mountain climbing all that along the way. How do you think the Bronco would fare on a trip like that? And do you have any plans to replicate that trip in a Ford Bronco?

JC: Oh, man, that would be a dream, dream trip. I think the Ford Bronco would be the perfect vehicle. Especially back when they did it, I bet they were driving down roads that you wouldn’t really even consider a road. Down through Central America and down along the coast of South America, it’s considered the ultimate road trip. So, yeah, you’d want a vehicle that can handle a lot, for sure.

CM: I was able to film Alex Honnold talking about Rivian last year. And now with your involvement with the Ford Bronco, there seems to be crossover between climbing and outdoor athletes in cars. In the 20-plus years you’ve been a professional climber, what are some of the changes you’ve seen now that climbing is getting more popular and is being brought into the mainstream?

JC: Yeah, I mean, some people say that I’m responsible for some of that.

CM: I would agree with those people.

JC: Sounds like there’s been quite an uptick since “Free Solo” came out. But I think climbing is such a great activity. It’s great individually. It’s something you do that really forces you to be present and in the moment. There are a lot of, you know, obviously physical challenges. But there’s also the mental challenges.

You have to have an adventurous spirit and want that kind of space in your life. But it’s also very introspective. And you’re managing your own fears. You have to push through those fears. It’s a process of failure and redemption. You’re always trying routes that are just a little too hard for you. You fail on them. And then you have to improve in order to do the climb. And you kind of cycle through that process over and over again.

I think that’s a good experience to have. And it’s also great to be able to spend time with your friends — it’s a great social activity, too. So people have really embraced that. And it’s a nontraditional kind of sport. When I started, it was a very fringe activity.

I always believe that you take care of the things you love. And so in a way, it’s a good step for people to pay attention to the environment and hopefully protect and preserve the environment. So I think it’s great.